The Importance of Speaking a Language when Studying Abroad

The Importance of Speaking a Language when Studying Abroad :

Catie Skinner joins our "LOLing with Language Lovers" guest blog all the way from Madrid!  She is currently doing an immersive study abroad program through Middlebury College. 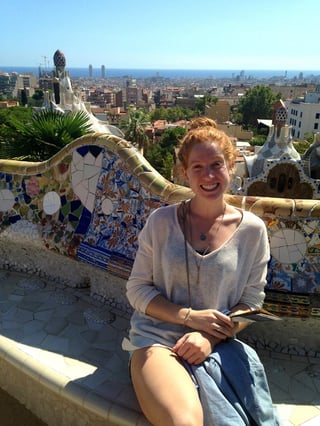 "Speaking Spanish has definitely made traveling in Spain so much more enjoyable. Even though most people see my red hair and assume that they have to speak English with me, I often see the look of relief on their face when I respond in Spanish. It's funny, sometimes I'll even see a look of annoyance from a waiter as I walk into a café or restaurant because they assume that I'm going to be this American that expects them to conform to my language. Those people often do a 180 with their attitude once I speak to them in Spanish, and that's a pretty cool feeling, even if I definitely get annoyed that my red hair puts such a large "ENGLISH ONLY" sign over my head. It's also really helpful having the ability to ask anyone on the street how to get somewhere... I've gotten a bit lost a few times, and I love that I can stop someone on the street and ask them where to go. When my parents were here, I also had to make a restaurant reservation, call a store about a missing item and make a change to their hotel reservation, and being able to do all of that in Spanish still makes me excited.

My favorite thing about getting to know Spain is seeing how people interact here; sometimes, it's a little much (any couple you see in the metro or on the streets or even in the gym (...) is showing affection, whether it be full-on you-should-get-a-room making out or smaller affectionate gestures, which doesn't make missing my boyfriend any easier), but at the same time, it's really nice. In the US, there seems to be such an issue with intimacy, but the Spanish don't give a crap. They greet someone they've just met with two kisses on the cheek; they occasionally touch the arm of someone they're talking to, to show interest and that they're paying attention; they don't care if you accidentally bump into them in the metro or passing them on the street.

If I couldn't speak casual Spanish, I think I would have a lot more trouble understanding my classes, for one; I wouldn't be able to walk into a café or restaurant or store and befriend the person working there or be able to ask them questions about what I'm looking at; dinner would be a heck of a lot quieter with my host mom, and that's some of the most interesting conversation that I have all day (she's super sweet and always has something to say about everything); and I wouldn't be able to show my personality as well in interactions with my Spanish friends, which gets easier and easier as my comprehension grows.

The craziest thing I've done while here was stay out the entire night before a school excursion to Burgos, (northern Spain) nearly missing the bus. We started in a bar (my friend and I have made friends with all of the people that work there, and we brought 3 of our other friends there for dinner). We stayed until after they closed, talking with everyone, and then they took us (at around 1:30) to a small-ish (but packed) club that we hadn't been to yet, which was a ton of fun, and we stayed there until around 5:00am, and then we went to one of their apartments until 7:00am and then two of us had to sprint back to where I live to get our stuff (she was (going to) sleep over at my place before the trip). We rushed through brushing our teeth, getting changed and drinking a cup of coffee, and we sprinted out of there to where we were meeting the bus. Needless to say, we were a little tired that day, but we still enjoyed the really cool parts of the first day of the trip, and then we went to bed at 11:00. Wouldn't have happened without being able to speak Spanish!"

Thanks for chiming in and demonstrating the importane of speaking a foreign language when studying abroad, Catie! Keep up the adventures!